Powers
Resurrection: Ted Grant possesses the ability to return from the dead, a total of nine times. These “nine lives” are characteristic of the mythical properties of average house cats.1 Ted apparently acquired this power when the magician Zatara altered a curse placed on him by the villain King Inferno. He at one point believed he had used up all nine lives, but the sorcerer Mordru (while disguised as Doctor Fate) later informed him that he always has nine lives unless he is killed nine times in a single ‘cycle’.

Decelerated Aging: The process that enables Ted to return from the dead has also retarded the aging process, enabling him to keep himself in peak physical condition. His aging processes were further retarded by exposure to the energies wielded by Ian Karkull on their first encounter in 1941.

Enhanced Vision: (formerly) In addition to the superfluous lives, Ted Grant also has preternatural eyesight that allows him to see in the dark. He once claimed to have witnessed Doctor Mid-Nite perform open heart surgery in total darkness. 2

Abilities
Hand-to-Hand Combat (Advanced): Ted Grant is a master combatant and has used his skills to train other heroes how to box including, Batman, Batgirl (Barbara Gordon), Catwoman, Black Canary, and Superman.

Boxing: His favorite, foremost and first learned combat skill was and always will be boxing. No matter how big the opponent or how seemingly impossible the odds might be in or out of combat Wildcat will always solve the issue with boxing.

As an orphan, Ted Grant took up a position as a heavyweight boxer, and eventually became tangled in his sinister managers’ plans. As a result, his mentor “Socker” Smith was killed by a boxing glove loaded with a poison needle by Grant’s managers Flint and Skinner. The dose was only intended to slow Smith, but the duo misjudged the potency. When Grant was arrested for the crime, Flint and Skinner, afraid he might know what had happened, arranged a hit on the young fighter. Ted Grant survived, but the policemen with him were dead. He became a fugitive and came upon a kid who was robbed of his Green Lantern comic. The kid, describing the mystery-man Green Lantern, inspired Ted to create a costume of a large black cat. He took the name of Wildcat and vowed to clear his name. He brought Flint and Skinner to justice, as the villains were forced to confess and Grant’s name was cleared. Wildcat continued to fight against crime.

He became a member of the Justice Society of America and the All-Star Squadron. During the Crisis on Infinite Earths, Ted’s legs were shattered by an out-of-control Red Tornado and he was told he would never walk again, but he soon discovered he had a god-daughter, Yolanda Montez, who took on the costumed identity of Wildcat.
Post-Crisis

Post-Crisis, Ted later recovered from his injuries sustained during the Crisis, and joined the re-formed JSA as they entered a limbo state to save the world from an oncoming onslaught initiated by Hitler decades before. Later he and his fellow teammates were released from this dimension, and regained prominence as the forefathers of the heroic community. He recently claimed to have magically acquired “nine lives” early in his career, and has in fact survived several otherwise fatal or seemingly crippling injuries. For example, during the ‘Final Night’ incident, he had a wall collapse on him. Wildcat was also one of the many combat instructors sought out by a young Bruce Wayne on the path towards becoming Batman. He also helped mentor Black Canary, teaching her a variety of boxing techniques suited to her build (mainly without the knowledge – or consent – of her mother, the original Black Canary, who was strongly opposed to daughter following in her footsteps).

In the post-Crisis rebooted continuity, Ted Grant never experienced paraplegia (though he was injured). He was also still a former heavyweight champion of the world.

He assisted the Justice League of America, where he was killed by a fifth-dimensional imp. It is revealed then he has nine lives, and has since 1945: hence how he can be over 70 years old, yet an athletic and powerful boxer. (It does not explain how he keeps his public identity as the same person, a famous boxer, for over fifty years, or how he explains away his youthful looks.)

Ted is one of the four members of the original JSA on the current team, and is seen as a kind (if rowdy at times), avuncular figure by the other teammates. He frequently scraps with the similarly rowdy Power Girl and may be attracted to her. Ted Grant has had several notable relationships with women. One included Irina, the mother of Ted’s son Jake. After Jake was kidnapped by the Yellow Wasp, they soon parted ways. Selina Kyle followed soon after. In addition to training her in boxing, Ted and Selina have shared a mutual attraction and had a torrid affair at one time. Queen Hippolyta also had an affair with Ted when Hippolyta traveled back in time to World War II. Ted was visibly shaken up after Hippolyta’s death.

Ted recently appeared to have lost the last of his extra “nine lives”, when he was “killed” by his Justice Society ally Jay Garrick, the original Flash. The two did this intentionally in order to permit Ted to escape control of the Spear of Destiny, which can permit the holder mind control over superpowered individuals, and thus save the world from the spear being used to dominate Earth. It has since been claimed, though (by the wizard Mordru), that in fact, not only does Grant have lives left, but that he will always have nine lives, as long as he doesn’t use up all nine of them within a certain (unspecified) period of time! 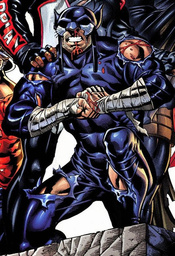