Parasite is able to absorb the life energy of other beings through physical contact. He is also able to absorb virtually any other energy form and use it.

Rudy Jones gained enhanced strength, intelligence, agility and stamina by absorbing the energy of other beings. By absorbing the energy of superhumans, he gains their powers (though these powers are finite, as he uses up the superhuman life force). Parasite is shown to have a special visual perception that allows him to see and sense life energy and power within a being. Even Superman isn’t immune, his powers become so drained that he becomes as weak as any normal human while Parasite is just as strong as Superman is normally.

Parasite’s powers changed enabling him to keep the energy he took longer. Somewhere Jones and his scientist counterpart gained new powers by absorbing the life energy of a shape-shifter as well. Now, not only does he sap the life energy out of his victims, he can actually become his victims right down to their DNA, including having access to their memories and natural abilities.

One of Parasite’s most prominent physical features is his pink-violet skin pigmintation and the physical deformities to his face, seemingly totally covered by a mask, including his eyes, nose and mouth, giving him ambiguous as well as fearsome facial features.

Originally a menial slacker, Rudy Jones was transformed into the Parasite while working as a janitor at a Pittsburgh S.T.A.R. Labs facility. Unknown to anyone at the scene, the Lord of Apokolips, Darkseid, remembered the Pre-Crisis Parasite and manipulated Jones to become the modern version. He made Rudy think that a waste container might have held something valuable. He opened it and was exposed to strange radiation that changed his body into the bald, green-skinned villain. Jones now had the ability to absorb the life energy of other people, leaving smoldering skeletons. This power was necessary for his survival as his own body is in a constant state of hunger for energy that it cannot sustain on its own. During this time, Martin Stein, one half of the Firestorm matrix (Ronnie Raymond being the other half) learned he was dying and decided to destroy all the nuclear weapons in the world. This did not sit well with Earth’s governments, particularly the United States, who sent the Suicide Squad to Times Square where Firestorm was holding a press conference. Things quickly got out of control as the Squad and the Justice League, both intent on subduing Firestorm, fought one another, and the Parasite (who was brought on the mission against the protestations of both Amanda Waller and Colonel Rick Flag Jr.) is released. He goes on a rampage and apparently kills Multiplex, only being brought under control by the cooperation of both teams. Later, he attacked the new Firestorm who easily subdued him and left him near death.

During one of his stints at Belle Reve Prison, doctors attempted to make him human again. Despite their intentions, the doctors only managed to change his skin color to the more familiar purple and also inadvertently increased his absorption power, enabling him to feed on other forms of energy, such as electricity and heat. After a number of years, the Parasite became involved in the plot to save Superman from overloading on solar energy. Rudy and Superman battled on the moon where Superman uncontrollably unleashed an immense blast of heat vision that the Parasite absorbed, causing him to mutate even further into a huge, hulking monster with teeth resembling a leech’s. This mutation again increased Rudy’s draining abilities, allowing him to absorb fast-moving objects’ inertia, as well as making him impervious to telepathic attack to an unknown extent, since he could now drain energy through a mental link as he displayed when Dubbilex telepathically attacked him. His extra size and power did have a downside, however; he needed to absorb more energy more frequently in order to stay alive.

Unfortunately for a scientist that was tending to Rudy during one of his terms in imprisonment, he was tricked by Lex Luthor and somehow absorbed into the Parasite. This joining was different from Rudy’s others as, apparently due to unspecified modifications to Rudy’s physiology during this stint at S.T.A.R. Labs (although some sources speculate that the scientist’s strength of character contributed to his ‘survival’), he actually retained the scientist, Dr. Torval Freeman, as a part of his own mind. This combined intelligence made the Parasite even more menacing, given Freeman’s superior intellect. He is later recruited by Morgan Edge to be part of the second Superman Revenge Squad. After Superman’s powers were converted into energy-based ones, the Parasite returned to see what he could absorb from the Man of Steel. However, at this point in time, Superman was not in full control of what was happening with his powers and nearly killed the Parasite. 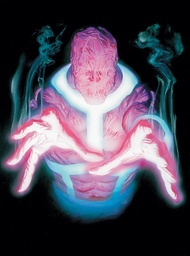