Holt is described as having “a natural aptitude for having natural aptitudes;” picking up complicated skills quickly and retaining them, such as performing emergency surgery on teammate Alan Scott after reading about the procedure in a medical text book. As Holt himself put it, “everyone has a talent…Mine is learning.” Holt is also a polymath who has specialized in multiple fields of medicine, engineering and science. He possesses 14 Ph.D’s (two of which are in engineering and physics-including assorted doctorates and masters in degrees in Law, Psychology, Chemistry, Political Science and Mathematics).

Holt is an Olympic Gold Medalist in the decathlon. He is a black belt in 6 different martial arts disciplines. Holt is also multilingual, though the extent of this hasn’t been revealed. He has been shown to speak the language of the nation of Kahndaq. Given Holt’s propensity for learning, it likely that he speaks several other languages as well.

Holt’s mask also doubles as a encephalic broadcaster, picking up aggregate thought-waves, allowing him to communicate with his T-Spheres and even project a speaking hologram of himself, even if he is injured or too weak to speak.

Michael Holt is the third smartest man in the world, a brilliant inventor and the second super-hero to call himself Mister Terrific. He is the successor to Terry Sloane. Despite having no powers, his T-Spheres make him invisible to technology and he is a member of the Justice Society.
Origins

At a young age, Michael Holt showed remarkable intelligence, reading and assimilating the works of Bohr, Einstein, Planck and Feynman, the pantheon of theoretic physics, at the age of six. He studied advanced science, space and time “while other children struggled through Sesame Street.”

Holt displayed as he called it, “a natural aptitude for having natural aptitudes,” easily picking up and retaining complex skills and abilities that other men spent their entire lives perfecting. Before he began his career as a superhero, he already possessed 14 Ph.D’s (two in Engineering and Physics — including assorted doctorates and masters in degrees in Law, Psychology, Chemistry, Political Science and Mathematics). He was a self-made multi-millionaire with a high tech firm called Cyberwear (later Holt Holdings Inc.) and was a Gold-medal winning Olympic decathelete.

While contemplating suicide after the death of his mentally retarded older brother and the accidental death of his wife and unborn child, Holt was met by the Spirit of God’s Vengeance, known as the Spectre (ironically, Holt is an atheist), who told him about Terry Sloane, the Golden Age superhero known as Mister Terrific. Inspired by Sloane’s life story he took the name Mister Terrific and later joined the current Justice Society of America, eventually serving as its chairman.

He initially wore ordinary clothes and a leather jacket with Sloane’s “Fair Play” emblem on the back. He currently wears a T-shaped mask, a black and white costume with red trim, and a collarless jacket in the same colors (the black sections of tunic and jacket forming a “T”) with “Fair Play” written on the sleeves and “Terrific” on the back.

For a time he acted as spokesperson for Tylerco and consulted that company on industrial espionage and security matters in exchange for that company helping fund a youth center Terrific had started.

Holt has a friendly rivalry with Batman, his opposite number in the Justice League of America. Also, Michael Holt has encountered Terry Sloane twice through time travel, with Sloane expressing pride in having so worthy a successor. Holt has been noted as the most intelligent member of the JSA in its history, surpassing his predecessor. He describes himself as the third smartest person in the world.

During a conflict over leadership of the Justice Society between former chairman Hawkman and then-current chairman Sand, Terrific was elected as the JSA’s new chairman by his teammates, despite not actively seeking the office. He served in this capacity until the team disbanded following the Infinite Crisis.

Mr. Terrific was part of the team assembled by Batman for an attack on the Brother Eye satellite responsible for controlling the OMACs. He played a critical role as his invisibility to technology allowed him to reach the satellite’s propulsion system, sending it crashing to Earth. On this meeting he met and befriended another African American superhero – Black Lightning.

As part of One Year Later, though Holt is still a member of the JSA, he has also become part of the United Nations Security Council’s intelligence agency Checkmate. He initially held the position of White King’s Bishop, but when the previous White King (Alan Scott) was forced to resign, he became Checkmate’s new White King, complicating his relationship with Sasha Bordeaux, Checkmate’s Black Queen. He has also given up his chairman position, which has been taken over by Power Girl. Mr. Terrific has also established an ill-defined mentorship with the latest Firestorm, Jason Rusch, over the missing year. The specifics of their meeting are yet to be documented.

After Superman, Batman, and Wonder Woman began discussing the reformation of the Justice League, in regards to Mr. Terrific as a potential member, Batman said, “I think we can get him.” Wonder Woman reminded Batman of Terrific’s position of leadership in the JSA, but Batman insisted, “That doesn’t matter, we can get him.” 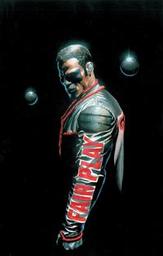