Lois Lane is an award-winning investigative journalist employed at the Daily Planet, alongside fellow reporter Clark Kent, photographer Jimmy Olsen and the Daily Planet editor-in-chief Perry White. Raised in the military as daughter of General Sam Lane, she is more than capable of handling herself in almost any situation. Her sister is flight attendant and later military officer Lucy Lane. She is the long-time romantic interest to and eventually wife of Superman. 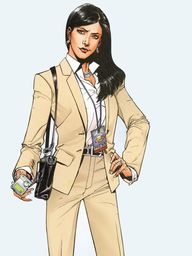