Grodd’s psionic abilities allow him to place other beings under his mental control. Grodd can also project telekinetic force beams, telekinetically transmute matter, and transfer his consciousness into other bodies. In recent issues he has shown the ability to absorb intelligence through the consumption of human brains. He possesses great superhuman strength far exceeding that of an ordinary gorilla. He is a scientific genius who has mastered Gorilla City’s advanced technology and who has created many incredible inventions of his own. He also uses big laser guns. However, his thought process still operates at a relatively human rate of speed; the Flashes have shown some degree of immunity to his telepathic illusions by moving so fast that their thoughts process Grodd’s illusions in slow motion.

Gorilla Grodd is a hyper-intelligent telepathic gorilla with the power to control the minds of others. At one time, he was nothing more than an average ape, but after an alien spacecraft (retconned from a radioactive meteor, the same one that empowered Hector Hammond) crashes in his African home, Grodd and his troupe are imbued with super-intelligence by the ship’s pilot. Grodd and fellow gorilla Solovar also develop telepathic and telekinetic powers. Taking the alien as their leader, the gorillas construct a super advanced home named Gorilla City. The gorillas live in peace until their home is discovered by prying explorers. Grodd forces one of the explorers to kill the alien, and takes over Gorilla City, planning to conquer the world next. Solovar telepathically contacts Barry Allen to warn him of the evil gorilla’s plans, and Grodd is defeated. The villain manages to return again and again to plague the Flash and his allies. Originally in his first Pre-Crisis appearance he first met the Flash while searching for Solovar, who had been imprisoned while on a trip to the human world. Grodd probed Solovar’s mind to find the secret of mind control, so he could control Gorilla City and use the inhbitants to take over the World, but Solovar breaks out of his cage and tells the Flash, so the Flash defeats him and apparently knocks the power of mind control from his mind. But it is revealed he had not lost his power, he overcomes his guard and takes over an underground winged race by burrowing underground, trying to use a machine to take away the intelligence of the other Gorillas. But Flash finds out from Solovar where Grodd has escaped to and destroys the machine. The winged people are freed from his control and Grodd is imprisoned again. Grodd has four guards set to guard him, but summons a burrowing machine which he uses to escape. He transforms himself into a human, and starts a factory to create a pill that will give him vast mental powers. Grodd easily stops the Flash, but then unexpectedly turns into a Gorilla again, where his powers do not work as his brain is not evolved enough. He tries to get to the machine that turned him into a human, but Flash molds the metal into handcuffs for Grodd, then takes him back to Gorilla City. Grodd devises a means of transporting his mind to another body while his original one dies, and takes over a man in Central City, but is again arrested. Later he caused the first assembling of the Flash’s Rogues Gallery, breaking them out of jail to distract the Flash after transferring his mind to that of ‘Freddy’, a Gorilla in a zoo. Thanks to Solovar the Flash found about Grodd’s escape. Ironically Grodd, despite using radiations to stop the Flash moving at superspeed, is defeated by the Gorilla’s mate when she hears him mention another Gorilla. He and Freddy are restored to their normal bodies. 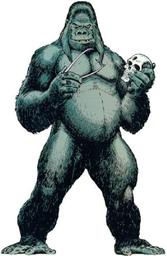