Clinton is a genius level intelligence and has skills as a master inventor. He is an average athlete and hand-to-hand combatant.

Chronos carries a wide array of time inspired weapons, including exploding hourglasses, a wrist-watch that projects razor-sharp hands, and a device that can slow time in localized areas and a sun-dial shaped flying platform. Clinton also carried a miniature hourglass filled with “compressed particles of time”.

A petty criminal all his life, David Clinton realized he was being arrested because he didn’t take the time to plan his crimes properly. Admiring the clockwork precision with which everything in prison was run, he decided he would make time work for him rather than against him. Fascinated with timepieces and deft with his hands, and possessing an inventive mind, he spent the remainder of his prison sentence laboring in the prison workshop, learning all he could about clocks and their mechanisms. Finally released, Clinton designed a costume and embarked on a new criminal career as the time thief called Chronos. His crimes brought him into repeated conflicts with Ray Palmer, the super-hero known as the Atom. 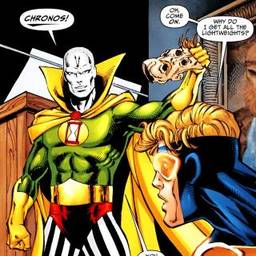