Captain Cold relies on his cold guns and instincts. Over the years Snart has modified his weapons to allow a variety of effects such as:

Leonard Snart was raised by an abusive father and took refuge with his grandfather, who worked in an ice truck, later befriending Lightning Thunderstein. When his grandfather died, Len grew tired of his father’s abuse and set out to start a criminal career. Snart joined up with a group of small-time thieves and in planning out a robbery, each was issued a gun and a visor to protect their eyes against the flashes of gunfire. This visor design would later be adapted by Snart into his trademark costume. In recent years he has added a radio receiver to them which picks up the police band to monitor local law enforcement. Snart and the other thugs were captured by the Flash and imprisoned. Snart decided to go solo, but knew he had to do something about the local hero, the Flash.

Snart read an article that theorized that the energy emissions of a cyclotron could interfere with the Flash’s speed. He designed a weapon to harness that power and broke into a cyclotron lab, intending to use the device to charge up his experimental gun. As he was finishing his experiment, a security guard surprised Snart. Intending to use his gun only to scare the guard, he inadvertently pulled the trigger and discovered that his weapon had been altered in a way he had never imagined. The moisture in the air around the guard froze. Intrigued by this twist of fate, Snart donned a parka and the aforementioned visor and declared himself to be Captain Cold – the man who mastered absolute zero. Snart then committed a series of non-lethal crimes, on one occasion placing the city in suspended animation in an attempt to force Iris West to marry him as he had fallen in love with her when he saw her in the prison, but the Flash got through a wall of ice and was able to reverse the process. He later fell in love with a newscaster, and competed with Heat Wave over her in a crime spree, but they were both beaten by the Flash. But after Barry Allen’s death, during the Crisis on Infinite Earths, Captain Cold became a bounty hunter with his sister Lisa, the Golden Glider.

Most recently Captain Cold was declared the leader of the Flash’s Rogue’s Gallery. His skill and experience have made him a strong leader to the likes of the Weather Wizard, the new Trickster, the new Mirror Master, and the new Captain Boomerang. Len seems to have taken the young Captain Boomerang under his wing, after the elder Boomerang was recently killed. Tabloids rumoured that Captain Cold’s sister, the Golden Glider, was Boomerang’s mother, making him Captain Cold’s nephew. This turned out to be false, however, as the new Boomerang’s mother has been revealed to be Meloni Thawne, who is also the mother of Bart Allen. Despite his more ruthless nature as of late, Captain Cold’s heart is not completely frozen, evidenced by having sent flowers to honor Sue Dibny, murdered wife of the Elongated Man. 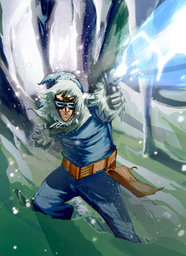