The exact limits of Blockbuster’s strength were not revealed. However, he was seen to shake off the effects of 30,000 volts as well as collapsing buildings.
Weaknesses

Before his deal with Neron, Blockbuster was never considered a smart opponent. It was possible that the meta-gene had affected his mental capacity. He was very predictable, and his moves were easily countered. After his deal with Neron, Blockbuster’s mental capacity was greatly improved, and he was now a master planner. He no longer considered brute force as his greatest strength, and if possible he preferred to refrain from using his powers. However, when provoked, he was known to revert to his old, brutal self.

Roland Desmond is a criminal mastermind who manipulated his brother into performing numerous criminal actions while under the influence of a strength-enhancing steroid. After his brother’s death, he too took this steroid and found his intelligence much reduced – until signing his soul away to the demon Neron. Using his combination of brute strength and great intelligence he took over most of the criminal operations in the city of Blüdhaven, opposed only by the vigilante Nightwing. After some time, Blockbuster’s mother died, a death which Blockbuster blamed on Nightwing. He set out on a campaign to ruin the hero’s life, taking away anything and anyone that mattered to him. When Nightwing was at his lowest, he stood by and allowed the new vigilante Tarantula to kill his enemy. The police investigation into Blockbuster’s death has been perfunctory at best.

During the Blackest Night, Desmond was resurrected as a Black Lantern and was among some members of his respective corps wrecking havoc in Gotham City. 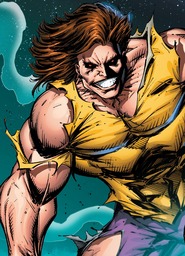