As do all the immortal Olympian gods, Ares possesses tremendous strength, though he is now perhaps the strongest of them, rivaled only by Heracles. Moreover, he is a master of conflict and strategy with centuries of experience in the field, and has complete telekinetic command and mastery over any weapon. He also possesses superhuman speed and superhuman agility equal to that of Hermes once he absorbs massive amounts of the psychic energies that give him his powers. Pertaining to his being a war god, violence, anger, hate, death, and bloodshed make him stronger and heals any wounds he may receive as his soul is able to absorb the psychic energy created by such events. His armor is virtually indestructible and his weapons are greater than mortal ones. He can shapeshift his being into any form he wishes and can teleport himself and others. He is now also recognized as the Death God of the Greek Pantheon and thus has control over the dead and is able to resurrect and command a whole army of undead from the Underworld to do his will and then send them back whenever he wishes. Being a god, he is also immortal and cannot be harmed by mortal weapons, only magical ones.

Despite being Zeus’ son, Ares never fit in with the other gods of Olympus and created his own realm, the Areopagus. Aphrodite, the patron of the Amazons, swore that her women would save the world with love from the hatred and warfare of Ares, meaning he opposed their creation. Recently, through his deceit and manipulations, Ares deposed Hades and became ruler of the underworld.

Ares did his best to destroy the Amazons, using Hercules against them, who sacked the island, but Diana was born and raised just in time to fight Ares as Steve Trevor’s plane, driven by one of Ares’s human puppets, crashed into Paradise Island. His plot was to fire the missiles between the United States and Russia at the same time, provoking World War III, but Diana managed to make him see, trapped in her magic lasso, how this chaos would lead to his own disappearing, with Ares having no one to worship him. He then tasks her with “saving mankind from themselves”, promising to return if she fails, essentially acting as a continuous test of her success.

Although Ares abandoned his plans that time, he managed to possess an unimportant criminal, Ari Buchanan. Possessing his body, he changed his name to Ares Buchanan. He began climbing the business ladder by providing hi-tech weapons for gang wars. As Buchanan, he had a relationship with his lawyer Donna Milton (who was Circe in disguise, although not even she knew it then), conceiving a daughter named Lyta Milton. Lyta has been shown to possess a great amount of magic, which she is still practicing. However, Ares did not care much about Donna, shooting her while she was pregnant. Circe, as Donna, later tried to help Diana out of a trap he laid. She used the last of her forces to shoot a gun, which produced a sort of mini-black hole and absorbed Ares into it. She, Diana, and the child survived.

As opposed to ancient times, the role of various gods were shown to have altered somewhat according to modern practices and beliefs. Because of this, the actual faith-based power Ares’ father Zeus received proved to be very much diminished. On the other hand, other gods such as Athena, Aphrodite, and Ares began to gain more power due to the appearance of the computer age, love never diminishing, and conflict remaining consistent. Thus the three godly siblings eventually took over Olympus as the godly home’s new masters.

Realizing that conflict proved to maintain his strength over the output of war, Ares changed his title to the God of Conflict. To celebrate this change he altered his appearance to a more approachable visage. His rule under this name proved to be short-lived though as the god Hades was also overthrown and Ares was all too eager to take up the mantle of God of the Dead. 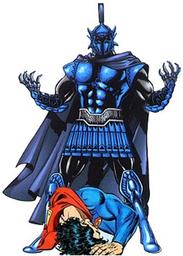