Aquaman’s most widely recognized power is the telepathic ability to communicate with marine life, which he can summon from great distances. Although this power is most often and most easily used on marine life, Aquaman has at times demonstrated the ability to affect any being that lives upon the sea (e.g., sea eagles), or even any being evolved from marine life (e.g., humans).

Aquaman has a number of superhuman powers, most of which derive from the fact that he is adapted to live in the depths of the ocean. He has the ability to breathe underwater. He possesses superhuman durability high enough to remain unaffected by the immense pressure and the cold temperature of the ocean depths, this also makes him tough enough to be invulnerable to machine gun fire. He also possesses superhuman strength. He can swim at very high speeds, capable of reaching speeds of 10,000 feet per second and can swim up Niagara Falls. He can see in near total darkness and has enhanced hearing granting limited sonar.

Aquaman has regenerative powers. After having brain surgery experiments performed against his will, Aquaman is left to die (and presumed dead). He later appears having healed completely without scarring.

Aquaman is born as Orin to Queen Atlanna and the mysterious wizard Atlan in the Atlantean city of Poseidonis. As a baby, he was abandoned on Mercy Reef (which is above sea level at low tide, causing exposure to air which would be fatal to Atlanteans) because of his blond hair, which was seen by the superstitious Atlanteans as a sign of a curse they called “the Mark of Kordax.” The only individual who spoke up on Orin’s behalf was Vulko, a scientist who had no patience for myth or superstition. While his pleas fell on deaf ears, Vulko would later become a close friend and advisor to the young Orin.

As a feral child who raised himself in the wilds of the ocean with only sea creatures to keep him company, Orin was found and taken in by a lighthouse keeper named Arthur Curry who named Orin “Arthur Curry” after himself. One day, Orin returned home and found that his adoptive father had disappeared, so he set off on his own. In his early teens, Orin ventured to the far north, where he met and fell in love with an Inupiat girl named Kako. He also first earned the hatred of Orm, the future Ocean Master who was later revealed to be Arthur’s half-brother by Atlan and an Inupiat woman. Orin was driven away before he could learn that Kako had become pregnant with his son, Koryak.

Orin then returned to the seas mostly staying out of humanity’s sight, until he discovered Poseidonis. He was captured by the city’s then-dictatorial government and placed in a prison camp, where he met Vulko, also a prisoner of the state, who taught Orin the language and ways of the Atlanteans. While Orin was there, he realized that his mother was also being held captive, but after her death he broke out and fled. Eventually, he made his way to the surface world, where under the name of “Aquaman” he became one of several superheroes emerging into the public view at the time. Upon his return to Poseidonis, he was made the king, and sometime later he met and married Mera. 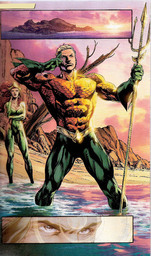