Wally’s primary superpower is his ability to control the speed of which his body vibrates and to move at super speed, which he uses primarily to run at super-human velocities. This super speed is derived from his connection to the Speed Force: a vaguely defined extra-dimensional energy force from which most speedster heroes draw their powers (while the original Flash, Jay Garrick, can draw upon the Speed Force, Jay is one of the few speedsters that is a metahuman first, allowing him to keep a degree of super speed even when the Speed Force was cut off from the others).

While many hypothesize that the Speed Force is to an extent sentient, most utilize it primarily as just a tool, drawing upon it and using it when necessary; however, Max Mercury, a veteran speedster, has been able to commune and communicate with it, making it his life’s goal to unlocking its secrets with many calling him the “Zen Master of the Speed Force”. The Speed Force serves as the ultimate measure of velocity in the DC Universe. They are often referred to in terms of barriers: Sound Barrier, Light Barrier, Time Barrier, Dimensional Barrier, and finally the Speed Force Barrier.[citation needed]

While most to all speedsters can make a connection and draw upon this force, West “mainlines” power from the Speed Force itself and cannot be cut off from the source. This connection to the Speed Force allows him additional abilities than other speedsters, such as lending and taking speed (which manifests in different ways, ranging from becoming speedsters themselves to bolstering others metabolisms and healing abilities, allowing them to recover from injuries in a fraction of the normal time), as well as absorbing kinetic energy in a less direct manner; he once absorbed the kinetic energy of the entire planet Earth while standing at the North Pole when his teammates were forced to move the planet to prevent possible earthquakes. Wally has also found a way to create a costume out of pure Speed Force energy.

Like all Flashes, Wally is surrounded by a protective aura that allows him to resist the heat created by the pressure of compressed air caused by moving at super speed as well as other environmental consequences of moving at such velocities. It is not known how Wally is able to circumvent the damage moving at such great speeds would normally have on the environment, but it has been hypothesized that his protective aura allows him to “side step” such environmental consequences. Because of his powers and connection to the Speed Force, he can run at varying speeds for extended periods of time without needing rest or causing damage to his body. It is his connection to the Speed Force that constantly rejuvenates him while running making it so he does not literally feed upon his own body to generate the energy for super speed. Even so, as a consequence of his sped up metabolism, he finds it necessary to eat often and in great quantities to help supply the chemical energy needed to run like he does.

Using his abilities, Wally can run at such speed that he can run on water, create powerful vortices with his arms or body, and vibrate at such speeds that he becomes invisible to the naked eye. Wally can also match the vibrational constant of solid objects and vibrate through them, passing his molecules through the spaces in between the atoms and molecules of the matter he’s vibrating through. Unlike other speedsters, once he became one with the Speed Force some of his abilities changed, one of which is that the objects Wally is vibrating though become atomically unstable and explode a second or two later. While this has its drawbacks, Wally has learned to use this offensively in battle.

Wally can also use his speed in a variety of clever ways in combat from creating a powerful whirlwind/tornado lifting and trapping his foe (which, if he chooses, can be used to knock his opponent out by robbing them of their oxygen supply), to binding and trapping his foes with whatever’s lying around before they have a chance to react, to pummeling them with hundreds of super speed punches in a few seconds. Like many of the more powerful speedsters, he is able to run at such speeds where he is able to travel through time, although being able to control and fine tune his temporal destinations is quote “extremely tricky”.

Wally is the fastest of all the Flashes, arguably even the fastest being that has ever existed and it has been remarked that Wally and Barry Allen are the only two speedsters that were fast enough to even outrun death.

The character was the nephew of the existing Flash (Barry Allen) character’s girlfriend and later wife, Iris West. During a visit to the Central City police laboratory where Barry Allen worked, the freak accident that gave Allen his powers repeated itself, bathing West in electrically-charged chemicals. Now possessing the same powers as the Flash, West donned a smaller sized copy of Barry Allen’s Flash outfit and became the young crimefighter Kid Flash. Wally had a strained relationship with his own parents and often looked to his beloved aunt and uncle for moral support and guidance. 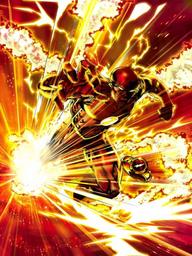