John Henry Irons has no superhuman abilities; however, he is an extraordinary inventor and engineer, and a natural athlete who frequently displays an impressive degree of strength. In addition, he wears a suit of powered armor which grants him flight, enhanced strength, and endurance. Steel modified his suit many times through his career. The initial “Man of Steel” design was armed with a wrist-mounted rivet gun and the sledgehammer (like the one used by his namesake John Henry) that was ubiquitous for most of his designs. The original design on his breastplate featured a metal version of Superman’s “S” insignia in tribute to the (temporarily) deceased hero, which Irons removed after the return of Superman. Two later armor designs incorporated a similar, but different, “S” symbol. A large hammer is also a key weapon in the suit’s arsenal. His most current “smart hammer” hits harder the farther it is thrown, is capable of independent flight, and has an on-board computer guidance and analysis system capable of detecting a target’s stress points.

Doctor John Henry Irons was a brilliant weapons engineer for AmerTek Industries, who eventually became disgusted when the BG-60, a powerful man-portable energy cannon he had designed, fell into the wrong hands and was used to kill innocent people. As the company would have coerced him to retain his services, John faked his death, and eventually came to Metropolis. While working a construction job high up on a skyscraper, he fell off while saving a friend from the same fate. His own life was saved by none other than Superman. When John Irons asked how he could show his gratitude, Superman told him to “live a life worth saving.” During Superman’s fatal battle against Doomsday, Irons attempted to help Superman fight the deadly menace by picking up a sledge hammer, but was buried in rubble amidst the devastation. Shortly after Superman’s death, he finally awoke and crawled from the wreckage, confused and saying that he “must stop Doomsday.”

He recovered, but to discover that the gangs in inner-city Metropolis (now unopposed by Superman) were fighting a devastating gang war using BG-80 Toastmasters, an upgraded version of his earlier AmerTek design. Irons created and donned a suit of powered armor in Superman’s memory in order to stop the war, as well as the weapons, which were being distributed by Dr. Angora Lapin (also known as the White Rabbit), a former partner and lover of his during his time at AmerTek Industries.

He was recruited as a member of the Justice League, due to Batman’s concern that the League was already top-heavy in brawn and required more thinkers. During his time in the League, Steel played a crucial role in the defeat of villains such as Prometheus and the Queen Bee. He even served as the leader of the reserve team- consisting of Huntress, Barda, Plastic Man, and Zauriel- left in the present during the One Million crisis. Following the battle against Mageddon, he ceased to serve as a full-time member of the League, although he stayed on as a supporting member for quite some time. He also revealed at this time that he had known Superman’s identity for some time. The two became partners of a sort and John Henry helped Superman build a new Fortress of Solitude, although he maintained some contacts with the Justice League, as shown when he was able to contact Batman to help Superman find Lois Lane after she had been abducted by the Parasite. 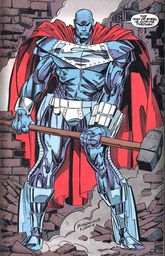