The Atom possesses the power to alter his size down to the subatomic level while retaining his natural strength level. This is accomplished by using the remnants of a white-dwarf star made into a belt buckle worn with his costume. Originally, he had to manipulate his abilities via the belt and later with hand movements before eventually syncing with his brainwaves itself. The Atom is one of the only heroes in the DC Universe that has 100% control over his body on the molecular level (Plastic Man and The Flash being examples of others), thus making him exponentially more powerful than he is often portrayed; he is only limited by his application of his powers. Some of the applications he’s demonstrated include reducing his mass to glide through the air (simulating flight, like Wonder Woman) and increasing his mass to punch through concrete. He’s also demonstrated the ability to make his costume appear and disappear at will by shifting its atoms between this dimension and another.

He has been shown to be able to ride phone lines to his destination by dialing a number and traveling through the handset (his signature use of his power), and recently shrinking small enough to travel on photon signals through fiber optic cable.

Some of The Atom’s more impressive feats include shrinking into Superman’s bloodstream and manually rearranging his molecules to create Kryptonite and defusing Black Lantern Al Pratt’s Atomic Punch and resizing within him, ripping his body apart in the process.

Following the events of Zero Hour, the Atom gained the ability to also grow in size and internalizes his other abilities without the use of his white dwarf star-based apparatus. However, when returned to his natural age, these abilities were lost.

He was a member of the Indigo Tribe, Ray possessed an indigo power ring powered by compassion, which provided him with flight, energy projection, and a protective force field. He also utilised a staff capable of duplicating the abilities of other wielders of the Emotional spectrum within range.

He has also shown the ability to allow others to shrink down with him if the situation requires it, such as when he shrunk himself, Superman, Flash, Green Lantern, Wonder Woman and Plastic Man to repair the links between seven shattered subatomic particles, or shrinking Steel, Supergirl and Superboy to directly treat a kryptonite tumor in Superman’s body. However, this ability is relatively limited; initially anyone other than himself who was shrunk would explode after two minutes, although he was later able to extend this time to around an hour.

Raymond “Ray” Palmer is a physicist and professor at Ivy University in Ivy Town, New England, specializing in matter compression as a means to fight overpopulation, famine and other world problems. Using a mass of white dwarf star matter that he finds after it lands on Earth, Ray Palmer fashions a lens that enables him to shrink any object to any degree he wishes. However, any object so treated soon explodes as a side effect, which precludes any practical use of the lens.

During a spelunking expedition, Palmer and his students, along with Jean Loring, find themselves trapped in a cave when the entrance collapses. In desperation, Palmer secretly uses the lens he has carried with him to shrink himself down in order to be able to climb to a small hole high in the wall that leads to the outside, knowing full well he will likely explode. Using a diamond engagement ring, Palmer enlarges the hole sufficiently and descends to the floor to try to alert the others of the escape route before dying. However, upon entering the lens’ beam, he finds himself returned to normal size. As the lens is covered with cave moisture, Palmer thinks this fact has altered the beam to allow this strange effect. When subsequent experiments show no change with the explosions, Palmer concludes that there must be some mysterious force in his own body that allows him to be shrunk safely and later returned to normal. He decides to use this effect to become a superhero. A later retcon, post-Brightest Day removes the influence of his exotic physical makeup, tying instead his survival to the discovery of a special compression matrix, a fabric able to spread the effects of the ray on the entire body, thus making it stable even when shrunk down.

Ray Palmer creates a belt tool from what was initially depicted as white dwarf star matter, which allows him to shrink down to subatomic size. Furthermore, he develops a special costume that he can wear at most times that only becomes visible when he shrinks significantly. In addition, he develops new equipment that allows him to decrease his weight in addition to his size. This allows him to glide on air currents on a low setting, while a high setting allows him to handle or strike objects with the equivalent strength of his normal size and build. A favorite travel method is to call some location on the telephone and when the intended phone is answered, Palmer can shrink down enough to literally travel through the phone lines in seconds to emerge out of the answering phone.

Originally, his size and weight decreasing abilities derive from mechanisms in his belt with a back-up device in his gloves. He carries out the bulk of his early superheroic adventures in his home of Ivy Town where he often helps his girlfriend, lawyer Jean Loring, win her cases. Much later, he gains the innate equivalent powers within his own body.

Palmer has fought against several alien and supernatural threats, as well as having his own rogues gallery: his arch enemy is Chronos the Time Bandit, the menace of the Bug-Eyed Bandit, the dangerous eco-terrorist Floronic Man, and the miniature misguided Bat-Knights of Elvaran. He also had several time travel adventures by means of Professor Alpheus V. Hyatt’s Time Pool. The Atom is a member of several incarnations of the Justice League, and the team is gracious enough to supply a special chair scaled to his default size which can elevate to whatever height needed so he can easily partake in team meetings without having to go out of costume. There, he meets Hawkman (Katar Hol pre-Hawkworld, Carter Hall post-Hawkworld), one of his closest friends in the superhero community. Neither character achieved major popularity, and even in their heyday were mostly supporting characters, often with Palmer as a specialist in size alteration who was often needed to access extremely confined areas only he could access. Hawkman would manufacture prosthetic wings for a myna Ray saved, taking on the name Major Mynah and became the Atom’s partner and steed. 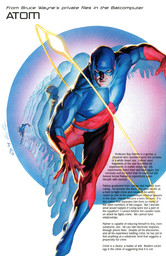